Yesterday was full of ecstatic, relentless, and unbridled rage for activists, and mounting fear and frustration for executives and employees at The Kolter Group, a real estate and development firm based in Palm Beach County. Over a dozen people with Everglades Earth First!, joined by members of Smash HLS and activists with the No New Animal Lab campaign (which was passing through South Florida on its cross-country speaking and protest tour), swarmed the sidewalks in front of Kolter’s offices in downtown West Palm Beach for an energetic noise demo during the afternoon’s torrential downpour. To keep the pressure constant and immediate, activists then headed to the homes of two Kolter executives: Bobby Julien, CEO; and Howard Erbstein, COO (Chief Operating Officer). 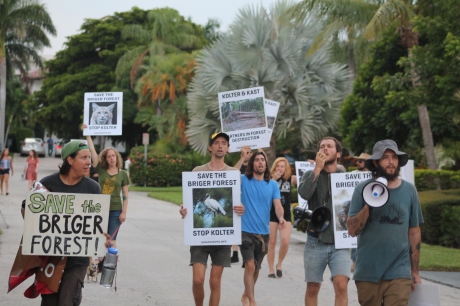 The protests were in response to Kolter’s plans to develop part of the Briger forest into Alton Homes, an upscale housing development that would neighbor animal testing facilities, strip malls, and hotels. The Briger forest is one of the largest unprotected tracts of forest along the eastern corridor of I-95 in Palm Beach County, and is home to at least thirteen federally and/or state-listed endangered and threatened species.