EEF! celebrates the Spring Equinox in the streets!

Last month, Everglades Earth First! (EEF!) announced that it would be putting land developer Kolter in the cross-hairs of its campaign against Scripps Biotech and the destruction of Briger forest in northern Palm Beach County. Yesterday, they followed up with a bold office demo and theatrical hell-raising. [Check out the local news coverage here.]

Even the devil came out to shame Kolter

EEF! was joined by members of the Palm Beach County Environmental Coalition and Smash HLS, a South Florida-based anti-vivisection group. The demonstration, which included a menacing presence at the windows of Kolter employees, also entered the offices of Kolter and Kast (Kolter’s associated construction company) as well as their neighboring business, to let them know what is at stake if the Briger forest is lost.

A Kolter bulldozer aims for a young gopher tortoise

Though Palm Beach County politicians have declared the Scripps plan a done deal, Kolter has not yet closed on the deal to develop Briger. Likewise the South Florida Water Management District has not approved the needed Construction and Operation Permit (which requires presenting plans for protecting listed species such as hands ferns and gopher tortoises, as well as a hazardous waste management plan). The Scripps-Briger “Phase II” plan was slated to have begun construction years ago.

This campaign against Kolter is only the latest stage of an anti-Scripps effort going on nearly nine years of organized opposition, when Jeb Bush first tried to ram through a scheme of biotech venture capitalism in Florida (funded by near $1 billion in corporate welfare hand-outs.)

Scripps Biotech was defeated in 2006 by a combination of protest and environmental lawsuits, after all the permits were approved and the developers (which at the time was Catalfumo famed domestic abuser and financial failure) had already poured concrete at Mecca Farms. 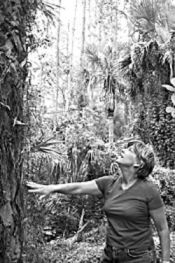 Joanne Davis of 1000 Friends on her trip with the New Times journalist who exposed Jeb’s original Scripps plan.

Over the next five years, a majority of the PBC County Commissioners who approved Scripps (four out of seven) were forced out of office for exposed corruption, with three of ‘em being sent to prison after pleading guilty to “Honest Services Fraud.”  This County even landed itself a headline in Time magazine

From the perspective of having personally been there most every step of the way, I guess I would say “done deal” my fucking ass.

If you value these stories from the frontlines of ecological resistance, help keep us around by subscribing or donating to the Earth First! Journal. 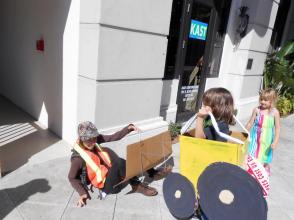 Kids get revenge for the tortoise friend.

Tell Kolter to Drop the purchase of the Briger Forest!

Come out tomorrow ready to hoot, holler and have a good time at the expense of Kolter’s comfort! Rally at 3:30PM at 701 S. Olive St., West Palm Beach, FL. For more info, contact evergladesearthfirst@gmail.com

Various groups released a press release declaring their commitment to descend upon the HQ of Kolter Group Co. tomorrow. Press are already covering the event, below are excerpts of their press release:

From Everglades Earth First! “Are these developers actually insane, or just heartless? Will they not stop their crusade of pillage and plunder until every last patch of land is covered by concrete and strip malls– until the value of every single thing is measured by how much money it can stuff into the pockets of the already too rich? We can’t help but think what Palm Beach County used to look like before concrete was laid in the name of “progress”– before these developers got their greedy hands on this once beautiful place. When will it stop? How far will we allow this to go?”

Sara Henry from PBCEC says: “If preserved, restored, and made accessible tothe public, the Briger Forest has the potential to become a community resource of limitless value. I want Kolter to walk away from this deal. It’s not much to ask. The Briger Forest is an extremely unique cultural resource now that development has made this forest the last surviving ecosystem of its kind in Florida’s Eastern Corridor.”

Below is a post from the Fire Ant highlighting tomorrow’s protest against Kolter Group Co.

The environment is the focus of a West Palm Beach protest tomorrow, the second day of spring, courtesy of activists from the Palm Beach County Environmental Coalition and Everglades Earth First! They’re concerned for the fate of Briger Forest, at 700 acres the largest bloc of undeveloped land in north-central Palm Beach County and one of the region’s last remaining stands of coastal pine flatwoods.

Briger has been in the sights of developers and the county’s business establishment ever since Jeb Bush birthed the idea of bioscience as the Holy Grail of local economic growth. Jeb’s brainstorm fizzled out. There’s still money to be made on the hustle, though, and now the Kolter Group is looking to cash in, with a scheme including housing, office space, and… more bioscience!

Advocating, among other things, a full environmental impact review of the proposed development, the protestors will assemble at 3 p.m. tomorrow at the Hibiscus Parking Garage by CityPlace. Garbed for street theater — face paint, costumes, puppets — they plan to march on Kolter’s WPB offices and “throw down for Briger.” [Info here and at (520) 250-0153.]
In other activism news…
Regarding genetically engineered foods, a “virtual lobby” campaign in support of legislation mandating its labeling runs through March 23. The legislation has been introduced in the Florida Senate by Maria Sachs (D-Delray Beach). A companion bill in the House is co-sponsored by Mark Pafford (D-WPB).
Organized by groups including Food and Water Watch, the campaign is targeting local state representatives like Kevin Rader (D-Boca Raton) and Patrick Rooney (R-Palm Beach Gardens), who sit on the Florida House Agriculture and Natural Resources Subcommittee. [Info here and here.]
Resistance to FAU’s sale of naming rights to the school’s football stadium to global private gulag operator GEO Group centers this week on the school’s faculty senate, which meets Friday at 2 p.m. on the school’s Boca Raton campus to consider a resolution expressing opposition to the deal. Here’s how it reads:

Whereas, faculty are concerned about the GEO Group’s management of its institutions in the U.S. and abroad; and

Whereas, faculty oppose important administrative decisions being made without participation or input from faculty, staff, or other FAU stakeholders; and

Whereas, the GEO Group’s business practices do not align with the missions of the university; and

Whereas, faculty think that the stadium naming has hurt the reputation of the university;

Be it resolved, that the faculty oppose naming the FAU football stadium the GEO Group Stadium.

Tepid as it is — and notable for its absence of any proposed response should the school stand by its complicity with the notorious human rights abuser — the resolution represents one small step for academic integrity.

Failure to pass the measure would expose the faculty as mere careerists and moral cretins. The French call it la trahison des clercs. Faculty, one hopes, know what it means. You can look it up.